To share your memory on the wall of Morris Shepherd, sign in using one of the following options:

Morris was a member of Central Parkway Church of God (Bridge of Hope). He was active in his church, community, and the Republican Party. He is a graduate of Lindsey Wilson College in Columbia Kentucky and the University of Cincinnati with a Bachelor of Science degree. His career in Chemistry and Management included working at P&G, Oil Kraft Inc., and Calvary Industries.
Burial with military honors to follow at Rest Haven Cemetery. In lieu of flowers donations may be made to the Alzheimer's Research Foundation.
Read Less

Receive notifications about information and event scheduling for Morris

We encourage you to share your most beloved memories of Morris here, so that the family and other loved ones can always see it. You can upload cherished photographs, or share your favorite stories, and can even comment on those shared by others.

Posted Jan 23, 2020 at 09:39am
I don't how to completely express myself, but I will try. Morris, and the whole Shepherd family, have been an important part of my life. My family moved across the street from Morris in 1979, when I was five years old. Brian, and his cousin Brett, befriended me soon after we moved in. The whole rhythm of my childhood (when I wasn't in school) revolved around getting up in the morning, going to Shepherd's at 10 am, and then spending as much time as I could at their house. Kids were always welcome in their home. Morris was always very kind to me, and would often tease me (in a friendly way) about a) hitting the head on my way in (I was taller than the chandelier) and b) the size of my feet (he called them ski boats, because they were). I remember how he worked hard all day but in the evening he would be sit on his couch and would eventually be fast asleep in front of the TV (sometimes with a newspaper in his lap). He'd joke with all of us and listened to us sincerely. We would all load wood in the fireplace, carry jugs of Nuba wax to the basement, and just really enjoy ourselves in all of this because Morris had such a great sense of humor. I wasn't very good at basketball, but he would patiently come out and play basketball or ping pong with us on many occasions. He was a family man, a devout Christian, and a very responsible citizen. I never once saw him lose his temper. I very much admired this man and he was and continues to be a template for my own life. After Brian was hurt, we played cards and I would talk with him. I didn't get to spend much time with him in these later years, but I will always remember him and pray for him. I'm confident he is praying for us right now. I look forward to meeting him again in the life to come.
Comment Share
Share via:
J

Flowers were purchased for the family of Morris Shepherd. Send Flowers

Posted Jan 21, 2020 at 07:18pm
It was a honor to know Morris. The world was a better place because of Morris! My deepest sympathy to Lavelle and family .
Comment Share
Share via: 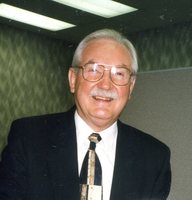