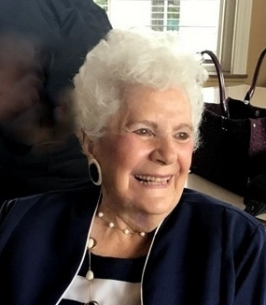 Mary Lynn Elizabeth Runtz (née Maddock), 92, of Green Township in Cincinnati, Ohio, passed away on Thursday, April 14, 2022 after a long life full of love and laughter. Nothing was more important to her than her family, friends, and faith. Anyone who ever met her remembers her as a pretty, stylish and smart woman who loved to make people smile.

Mary Lynn was born on March 26, 1930 in the Camp Washington neighborhood of Cincinnati to Paul and Eleanora Maddock. She was always close to her younger brothers, Paul and Denis. They bonded in their pride of their Irish heritage. One of her favorite memories was traveling to Ireland with her brothers later in life.

In 1948, Mary Lynn graduated from Our Lady of Angels High School. She was popular and remained friends with classmates for decades. Crossing paths with a fellow alumna was one of her delights.

At age 18, Mary Lynn married Charles F. Runtz on November 27, 1948. In 1951 she became a mother just three days before her 21st birthday with the birth of her son Charles, Jr. A year later, they welcomed son David and in 1955, son Jeffrey was born. In 1957, the birth of daughter Lynnette completed their family. In 1952 they moved to Dalehurst Drive in Bridgetown, across from St. Aloysius Gonzaga, where she remained a parishioner ever since. While her children attended school there, she volunteered as a PTA officer, an athletic association officer, a Cub Scout den mother, a cafeteria volunteer, and helped fundraising by participating as a P&G product tester. She was quite proud all of her children went on to graduate from Catholic high schools.

The Runtz family moved to Wildcherry Court in 1965. Mary Lynn and her neighbors bonded over block parties and remained life-long friends. She remained close to them even after she moved to Arbor Woods. During the summer, it was common to find Mary Lynn on the back patio, sunbathing on a raft floating in her "Runtz Natatorium" kiddie pool, which her son painted with swimming lane stripes.

While Mary Lynn was mainly a homemaker, she worked as a waitress and hostess at Maury's Tiny Cove. She even organized the Bengals tailgating parties she enjoyed with Maury's group. Tiny Cove remained her first choice for celebrating birthdays, anniversaries, and any other excuse to eat there as a family. She also worked for a time as a hostess for the downtown law firm Frost and Jacobs.

Mary Lynn was a social butterfly. She was in a bowling league for several years, a ladies "club" with her circle of friends, and in her golden years, she joined the Red Hat Ladies. She enjoyed playing cards, golfing, reading, traveling, and going to concerts and plays. Mary Lynn loved music and singing the most. She sang at the Watermill, the Gay 90's, and other local establishments. She even sang "I Left My Heart in San Francisco" on The 50-50 Club with Ruth Lyons. Her favorite song to sing was "You Made Me Love You."