To share your memory on the wall of Louise Schotte, sign in using one of the following options:

Print
On April 16th, 2020, Louise Cahoon Schotte passed away in hospice care at home, under the loving care of her niece and daughter, comfortably at the age of 93.

Louise Cahoon was born April 28, 1926 in New York, NY to parents Louis and Jes... Read More
On April 16th, 2020, Louise Cahoon Schotte passed away in hospice care at home, under the loving care of her niece and daughter, comfortably at the age of 93.

Louise Cahoon was born April 28, 1926 in New York, NY to parents Louis and Jessie Cahoon. Louise was a loving, stubborn woman who lived her life on her terms. An avid lover of horses, Louise was always on the move, travelling the country to ride her horses anywhere and everywhere, with her favorite location being Brown County State Park in Indiana. After the tragic loss of her daughter Betty Jean in 1985, Louise took special care of her grandchildren, providing maternal guidance sadly taken from them too soon.

There will be a celebration of life to be held at a later date. She will be cremated and interred with her daughter Betty Jean Stenger at Spring Grove Cemetery in Cincinnati, OH
Read Less

Receive notifications about information and event scheduling for Louise

We encourage you to share your most beloved memories of Louise here, so that the family and other loved ones can always see it. You can upload cherished photographs, or share your favorite stories, and can even comment on those shared by others.

Posted Apr 28, 2020 at 10:57pm
We loved her dearly! Loved camping and riding with her! Lots of sweet memories! Thanks for bringing her Linda last time we got to see her and she teared up and said Rooster! Gone but never forgotten!
Comment Share
Share via:

Posted Apr 20, 2020 at 09:35am
Louise was always our inspiration! Had a soft side that she tried to keep hidden, but did show because of all the critters she took in. She sat straight in the saddle, always carried her crop and didn’t put up with anything from her horses. Always the one that would stay out on the trail if anyone wanted to go on when others went back to camp. She’s riding with Cindy H now!

Thank you Cindy B

Posted Apr 20, 2020 at 09:30am
Thurs. Morning a dear and beloved riding friend went to heaven. She was 92(?) and was still riding up till 3 or 4 years ago. Louise was a true inspiration to me. She was in her early seventies when I met her. I rode many miles with her over the years. She could ride all day,was a tough woman, seemed fearless, loved her horses. She loved riding and camping. I know we all have lots of stories about Louise. One of my favorites we w jvmere crossing the river in Big South Fork Tenn.. Her mare fell with her. It was a cold day and she was soaked. When we got to our lunch stop we all took off an article of clothing to give her. She wore someones extra shirt, a pair of long underwear , my socks, etc. The guys gave her some good natured teasing about stripping. She had a long ride back to camp in that outfit. She was a trooper through it all. I told her if she ever thought about giving up riding I was duct taping her in the saddle. Louise you will be missed and I am so glad to have so many fond memories of riding and camping with you!
Comment Share
Share via:

Posted Apr 18, 2020 at 02:30pm
We grew up listening to the stories about Aunt Louise from her brother and my father, Edward Cahoon. He always talked about riding horses with her through the country side of Vermont, a place i had only been to once. He said they did everything together and he felt closer to her than anyone else in the family. I have always heard that she lived her life on her terms and not many can say that. She clearly was a respected and special lady. It is my hope she rests in peace and those closest family members and friends remember her with love and keep her memory alive.
Comment Share
Share via:
MS

Thank you Mike. She loved your dad & all of your family dearly. Your dad was my favorite great uncle. I always loved when Uncle Ed would come to visit in his cowboy hat. 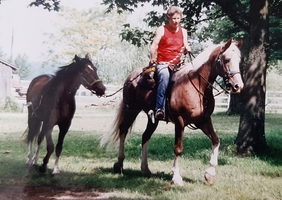 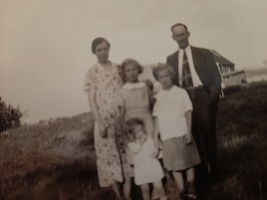 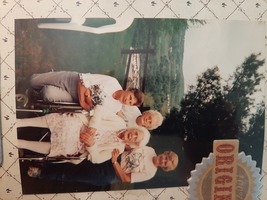 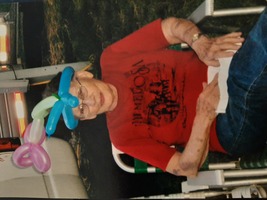