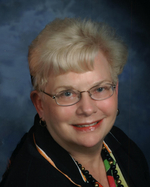 Sandra J. Hathorne was born on July 2, 1945 in Panama City, Florida to Virginia C. and James C. Hathorne. Florida didn’t keep them long as her father’s work brought the family, now with a younger brother in tow, to several other southern cities, including Louisville, Nashville, and Memphis. By the time they ended up in Memphis, Sandy completed her senior year of high school and entered Memphis State University.

Sandy got a job as the “soda fountain girl” at a local drugstore just before her freshman year. The drugstore was a popular lunch spot for locals working nearby and one such patron was Bill Allred. Bill was a rising junior at Memphis State University and worked at a nearby Kroger store. He would sometimes stop at the drugstore for a quick bite to eat. Noticing the cute, new girl behind the counter, Bill turned to his friend and pronounced that he would be getting a date with her! His friend scoffed at Bill’s confidence, not thinking it would go anywhere. And at first, it didn’t. They went out on a date once and that seemed to be the end of it. Until one fateful day, when Bill came across a pile of scattered papers on the ground of campus, he picked them up and realized they were lost freshman registration papers that belonged to none other than Sandra Hathorne. Off to find Sandy and return the papers, he began walking towards a building just as Sandy was walking towards him, retracing her steps and attempting to find where she might have lost them. Bill would say, “Now I had an ‘in’!”

They started dating throughout Sandy’s college career and even after Bill graduated from MSU and joined the Air Force Reserves. Sandy wrote Bill every day he was away at training. 1966 was a big year for them; Sandy graduated from MSU in the spring, they were married in the summer and later moved to Cincinnati in the fall!

Cincinnati became Sandy and Bill’s home for the next 55 years. They eventually settled to Delhi Township where they lived for over 50 of those years. They adopted a son, Chris, in 1971 and a daughter, Becky, in 1975. Sandy would teach elementary education for 33 years and the majority of those years were spent teaching 4th grade at C.O. Harrison Elementary school, where she was known as a firm but dedicated teacher. Sandy earned a Master’s Degree in Education from Xavier University while teaching full-time and raising two kids.

Sandy was an active member of Westwood United Methodist Church. She spearheaded committees, volunteered at Vacation Bible School and for the Prayer Chain, taught Sunday school classes to the Merrimates, and collected donations for “My Neighbor’s Place.” The Merrimates class is where she found some of her very best friends and enjoyed the monthly social events and progressive dinners the group held. She and Bill went to many a production at the Showboat with Merrimates friends and she always enjoyed going out to dinner. Bill would say that she didn’t mind cooking Sunday through Thursday, but he’d better take her out on Fridays and Saturdays! And every wedding anniversary was a tradition to have a special meal at the Maisonette.

Sandy enjoyed daily walks, word jumbles in the newspaper, as was an avid reader. She always had a book by her nightstand or in her hands while sitting on the couch. She played tennis, took up golf for a bit, and once Bill retired in 2007, they would spend every winter in Naples and Bonita Springs enjoying a leisurely life reading on the lanai and enjoying the delicious grouper in Southern Florida.

Sandy’s warm smile and girlish giggle will be missed by many. She leaves behind her husband of 54 years, her son and daughter, and five grandkids.

In lieu of flowers, donations in Sandy’s name can be made to the Westwood United Methodist Church. 3460 Epworth Ave, Cincinnati, OH 45211.