To share your memory on the wall of Bernard Kluesener, sign in using one of the following options:

Once stateside, Ben completed his high school education, graduated from Elder High School, worked at a meat packing plant, worked for the family busines (Kluesener Painters), and met the love of his life, Joyce Hughes at a Friars Club dance. Ben and Joyce were married November 28, 1953. Post marriage, Ben became interested in newspaper production, took typesetting classes, became a printer, and worked for many years as a printer for the Western Hills Press and later for the Billboard Publishing Company. But life is fickle. Unexpectedly, the Billboard Publishing company moved, and at the age of 58, with three kids still at home, Ben Kluesener went job hunting – and landed a job with the United States Postal Service. Ben became a mailman – a happy mailman. Nicknamed “Grandpa”, Ben enjoyed being outside, walking and talking to the people on his mail route. Later, Ben was promoted to working as a package and mail sorter at the Postal Service’s main office on Dalton Street where “Grandpa” out-worked them all. On November 16, 1990, Ben Kluesener retired from the United States Postal Service at the age of 65 and in the best shape of his adult life.

Ben Kluesener the man was friendly, easygoing, never lied, and never met a stranger. Coming from a very large family, Ben’s niece Peggy said it best, “Uncle Ben was one that never forgot your name and always cared what was going on in your life.” Ben enjoyed hunting in his youth, golf as an adult, baseball all the time, the trees in his yard, reading the newspaper in the morning, a Pepsi in the afternoon, and eating ice cream at night. He was the family storyteller. He rarely complained- unless his food was cold. Ben liked his meals heated to lava-hot.

Above all else, Ben loved his family and had steadfast Catholic faith. Ben started his own family of five with Joyce, and Ben loved Joyce. Married 68 years, Ben and Joyce shared and enjoyed life always together. In the early years, Ben drove the car while Joyce tended to five kids. Many years later, Joyce drove the car while Ben navigated. They were complements; depending on each other, needing each other, sharing everything, and loving each other. Ben gave his children the gifts of time and presence. Time actively listening, really listening, acknowledging while mirroring passions and punctuating thoughts with a “Holy Cow!” or “Jeepers!”- secret code for “I hear you and I understand”. Ben, with Joyce by his side, gave countless hours supporting and sharing joys and sometime sorrows at every imaginable child, grandchild, and family event. In addition to family cheerleader, Ben was the family chief auto mechanic, plumber, electrician, window repairman, yard and waste manager, school project helper, and painter.

Ben was sustained by his beliefs and the Catholic Church. Ben’s faith was strong and he was a loyal Catholic servant. Ben was baptized Catholic and received the sacraments of Eucharist and Confirmation at Resurrection Church, married Joyce in St. John’s Church, and made sure all of his children attended Catholic schools. Ben financially supported his parish, worked the church festivals, and unfailingly attended weekly church services. His Mass of Christian burial is being held at St. Jude the Apostle Church, and his final resting place will be St. Joseph’s Catholic cemetery. Ben said grace before every meal, prayed silently and often throughout the day, and prayed for his family every night. It brought Ben great comfort to be able to receive the sacraments of Reconciliation, Anointing of the Sick, Eucharist, and being able to attend St. Phillips mass services in the few final days before he died.

Receive notifications about information and event scheduling for Bernard

We encourage you to share your most beloved memories of Bernard here, so that the family and other loved ones can always see it. You can upload cherished photographs, or share your favorite stories, and can even comment on those shared by others. 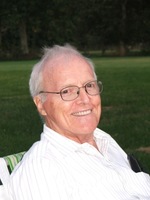 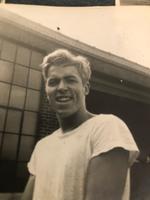 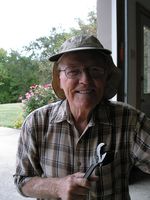