To share your memory on the wall of Anna May Olding, sign in using one of the following options:

Paul and Anna May were married shortly after they graduated from Edgecliff and Xavier. After Paul's stint in the Marine's they settled in Cincinnati. While raising a family of seven children, Anna May still had time to volunteer with Meals on Wheels and the Westfed Food Pantry. She also enjoyed socializing with her many friends and the Sunday Social group. Both were avid Xavier Basketball fans and enjoyed traveling to away games with friends.

Receive notifications about information and event scheduling for Anna May

Receive text or email updates for Anna May

We encourage you to share your most beloved memories of Anna May here, so that the family and other loved ones can always see it. You can upload cherished photographs, or share your favorite stories, and can even comment on those shared by others.

Brad and Stephanie Raines and Uncle Jim & Aunt Carole sent flowers to the family of Anna May Olding.
Show you care by sending flowers

Posted Feb 11, 2021 at 02:55pm
The Bereavement Ministry Team and the Parish Community of St. Mark Catholic Church, Huntersville, NC, extend our deepest sympathy at this difficult time. Be assured that you and your family are in our prayers.
Comment Share
Share via:
BR

Brad and Stephanie Raines purchased flowers for the family of Anna May Olding. Send Flowers

Uncle Jim & Aunt Carole purchased the The FTD Deepest Sympathy Arrangement for the family of Anna May Olding. Send Flowers 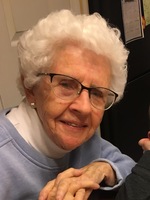