To share your memory on the wall of Anna Lindholm, sign in using one of the following options:

Anna graduated from Mt. Saint Joseph Catholic High School with honors. She was also the first in her family to graduate from college. She achieved both a bachelor’s degree in education and a Master’s degree in Counseling and Guidance plus 30 semester hours while simultaneously rearing her three children. Prior to that, Anna was accepted into and attended the prestigious College Conservatory of Music majoring in piano. While at the College Conservatory, Anna met and married Edward Joseph Lindholm, a civil engineer from Wyoming state with whom she later had three children, Victoria Anne, Edward Joseph Jr., and Karl Arthur. Edward Joseph Jr. tragically passed away in an auto accident at the age of 19.

While in her twenties, Anna traveled and lived in Europe with her husband and children, residing in Italy, Switzerland, Holland, and Grenoble and Bordeaux, France where she learned to speak French fluently.

Anna was a lifelong educator and a Counselor. She worked both in the Catholic and public school systems in Cincinnati. She was beloved by her students and respected by her Colleagues and administrators. She loved all animals, music, and the theater. Her pets were the light of her life! Anna was married to Ed Lindholm for over 60 years until his passing. Home was where her heart was, and where she wanted to be with her pets and her family.

Anna is survived by her daughter, Vicky Lind, who cared for Anna in her later years. Anna will be much greatly missed by her family.

Receive notifications about information and event scheduling for Anna

We encourage you to share your most beloved memories of Anna here, so that the family and other loved ones can always see it. You can upload cherished photographs, or share your favorite stories, and can even comment on those shared by others. 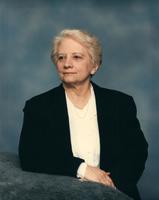